As one of the most unlikely Netflix hits of 2020 The Queen’s Gambit is about the story of Beth Harmon, a chess prodigy who also struggles with addiction. Beth is an orphan whose mom died in a car crash when she was nine. Later, she is adopted by a woman whose husband abandons her. Traveling all over the country, and later the world, Beth starts to rise in the male-dominated sport. Although The Queen’s Gambit is not a true story, her character is inspired by Grandmasters Robert Fischer, Boris Spassky, and Anatoly Karpov. These were the top chess players in the 50s and 60s and conveniently do not appear in the book or the show.

Anya-Taylor Joy plays Beth’s character brilliantly. She is able to capture a quirky, glamorous and confident woman. This confidence is present in Beth when she asks the janitor to teach her to play chess at the orphanage, when she declares she is going to win over her opponents, and when she tells the man she just slept with that he can stay or go. While Beth has several partners, her love interests are a minor plot line. It is a refreshing to see a female character written and portrayed with so much agency in all aspects of life.

Beth faces the reality of being a woman in a male-dominated sport. The first chess tournament she participates in, she demands to be put in the open bracket and not the ones for amateurs. After she starts winning, soon the other players have no choice but to give her respect. Beth remains unfazed and intimidated by chess players, even if they are Grandmasters. Given that this takes place in the 60s, there could have been more scenes that dealt with the reality of sexism that someone in Beth’s position would face. Not everyone would have been happy to see her in a “man’s” sport.

When someone is a prodigy, they become great not only because of talent but the passion they have. In The Queen’s Gambit we see Beth’s obsession with the game. She wants to read all the chess books and magazines she can get her hands on. She is always willing to learn more strategy from men who are also her competitors—not afraid to accept help. There are multiple scenes of her playing alone. Most notably she hates losing or even ending a game in a draw. This drive is something that makes her one of the best in the world. It is something seen in all the great champions but less frequently portrayed in women.

However, Beth does have a vice. As an orphan, she becomes addicted to green tranquilizer pills. They seem to help her visualize the chessboard and practice moves in her head. She goes to great lengths to get her hands on the pills. She broke into the medicine room at the orphanage and she steals her adoptive mom’s prescription. Once Beth gets a little older, she also starts drinking heavily. There was the time she showed up to a match drunk and she went into a downward spiral after losing to Grandmaster Vasily Borgov and losing her adoptive mother. This scene is way too glamorous and not raw enough-I do not feel her depression at all.

Beth snaps out of this depression with the help of her friends which is wildly unrealistic since it would not be easy to suddenly stop her addictive behaviors. The reality of representing US Chess in Russia is what drives her to start serious training for the most difficult matches of her life. At one point, Beth refuses to take money from a Christian group to go to Russia. She would not agree to speak out against Communism, using their specific talking points. This is another example of how Beth is not willing to compromise her values. Luckily, her friend she met at the orphanage becomes a lawyer and can help Beth afford the trip. She ends up winning the invitational and beating Borgov.

As The Queen’s Gambit has captured the hearts of so many, sales of chess sets have soared. The series does a great job in explaining parts of the game to keep the audience engaged. Who knew that chess scenes could carry so much drama and tension? It felt as exciting as watching a basketball game. Beth has had to overcome a lot of obstacles and trauma in her life. While she has help along the way, it is also her determination that allows her to succeed. The Queen’s Gambit covers the story of a fictional female Grandmaster quite well.  It is meant to be an optimistic, feel good story. However, there was a missed potential to explore more of the complexities in Beth’s life—what is really like to deal with sexism, addiction or losing a parent. 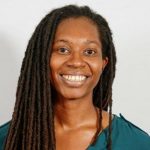 Candace Burton is a Community Partnership Associate at Good Sports. She’s on a mission to help break down barriers for young people to access play. When she’s not working or writing she also loves reading, practicing yoga, cooking and of course watching sports.
View My Articles

Candace Burton is a Community Partnership Associate at Good Sports. She’s on a mission to help break down barriers for young people to access play. When she’s not working or writing she also loves reading, practicing yoga, cooking and of course watching sports.
View My Articles