This year has been anything but business as usual.  Some time around March of 2020, the world was hit with a virus.  No one knew it would turn into the pandemic it has become, but one thing is for certain, we demanded that come hell or high-water there would be football.  As the summer slowly came to a close, and the school year began for many, I couldn’t help but notice how quiet it was without the coach’s whistle that I heard every day from the college up the block from my house.  There would be no college spring games, no summer scrimmages, no practices, and for many still, no season.  As a self-proclaimed lover of all things football, I have spent many hours reading, watching, listening to and all-around nerding out on the ‘pigskin sport.’  I’m a freelance sports journalist, who focuses on college football.  Without it, how would I survive; emotionally and financially.  I decided to make the most of it.  I pulled a book from my ever-growing shelf of “must-reads,” drove to the beach on a random Tuesday and started reading.

It has been my experience that people either love or hate the game of football, and I’m convinced that those who hate it only do so because they don’t fully understand it.  But that’s just my humble opinion.  There’s something about the game that demands a reaction.  For some of us we take to Twitter and express our opinions and call them facts.  But, for those of us that love it, and I mean truly love it, there are always stories of how that love began, who cultivated it, and why it is such an important part of our lives.

More often than not there’s a personal sentimentality toward the game and many feel as if they were born to do nothing else but be a part of football.  For Emory Hunt, owner and analyst of Football Gameplan, he would tell you just that.  In fact he would go a step further.  In his book, Football: A Love Story, Hunt, along with the Football Gameplan team introduces us to coaches, players, execs, entrepreneurs, and entertainers, and collected over 100 stories on their love for the game — the game of football.

I asked Hunt why he decided to write this book and the answer was nothing short of purposeful.  He describes how in 2015 the movie Concussion, which brought to light the neurological deterioration of the brain known as Chronic Traumatic Encephalopathy (CTE) premiered and created a black cloud over the sport.  “There was so much negativity surrounding football at that time.  To be honest, there still is.  It was good to get some positivity out there.  We needed it.  It’s a book that everyone can benefit from.  We can all relate to having a passion or a love for something.”

Originally, the FGP team reached out to over 200 people.  “We wanted that exact number,” Hunt says.  “But I’m more than happy with the responses we got.  We were able to share over 100 stories that may have never been told.”  Every person (both men and women are profiled) was asked the same questions, and as you would expect many of them have similar stories.   For some, football was a way to stay out of trouble in rough neighborhoods.  One example that stood out to me was BJ Hall, quarterback coach at Largo High School, who explained how he turned to football to escape his home life, with two parents who were addicts. At just eight years old he would wake up early on Saturday mornings to go outside and play, his football always in tow.  Having the opportunity to play in both high school and college he learned discipline and structure, and credits his work ethic to wanting to be able to give back to future generations of young men.

For others, football was a passed down appreciation.  Kyle Hockman, head coach at McEachern High School in Georgia, grew up as the son of a high school football coach, and remembers always being around the game.  He looked up to the players his dad coached and called them his heroes.  A self-described forever student of the game, he knew early on that he wanted to coach.  “I was always the one learning play books and instructing others on the field.”  He relishes on being the type of coach that helps his athletes become men. He states that “their successes on the field should help them to have success in life.”

The theme of successful young men may be one of the most quoted ideas throughout the book, especially expressed by the coaches who were profiled.  More and more coaches are taking on the role as a father-figure of sorts to the young men on their team, and they see their job as an important responsibility to help shape the future of those they’ve coached.  Many tell stories of former players who came back to say thank you and those who continue to be part of their lives today.

Hunt even tells his own story and praises the game of football for helping to shape his life.  At the age of five he immersed himself in the game and never looked back.  After an injury in college sidelined him forever as a player, he was able to continue as part of his team by taking on coach-like duties.  Hunt says these responsibilities helped pique his interest in coaching, which he did at his old high school in New Orleans.  After a brief stint in corporate America, Hunt realized that he wasn’t ready to give up on football just yet.  In 2007, Football Gameplan was born.  When asked about his legacy, Hunt says that he hopes when future generations sit down and turn on their TV to watch the Football Gameplan team and himself, they will say “it is a place where football finally makes sense.”

I tried to get Hunt to tell me which of the profiles was his favorite, but in his true objective fashion he could not.  “I honestly can’t pick a favorite.  The beauty of the book is that everyone’s story is so unique.  It made the process fun, and in turn makes the book fun.”

If you’re a football lover or just someone who wants to read some truly inspiring stories, this book cannot be missed.  It is a quick read, but I suggest taking the time to really appreciate what Hunt and his team have created.  I’m not saying you have to be studious like me and follow along with a highlighter while sitting at the beach, but keeping a pen close by to mark up your favorite moments won’t hurt.  I have many.

So while football this year, and possibly next may look, feel, and sound different, those of us who truly love the game, know that where it really exists is always in our hearts. 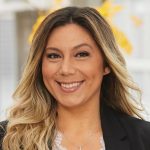 As a multimedia journalist, Adrienne works on feature stories and considers herself a storyteller, looking for a unique perspective that is both engaging and purposeful. Adrienne has experience in photography, social media content, and radio hosting. She is a graduate of Hofstra University, Johnson & Wales University, and Wagner College and resides in Astoria, Queens.
View My Articles

As a multimedia journalist, Adrienne works on feature stories and considers herself a storyteller, looking for a unique perspective that is both engaging and purposeful. Adrienne has experience in photography, social media content, and radio hosting. She is a graduate of Hofstra University, Johnson & Wales University, and Wagner College and resides in Astoria, Queens.
View My Articles